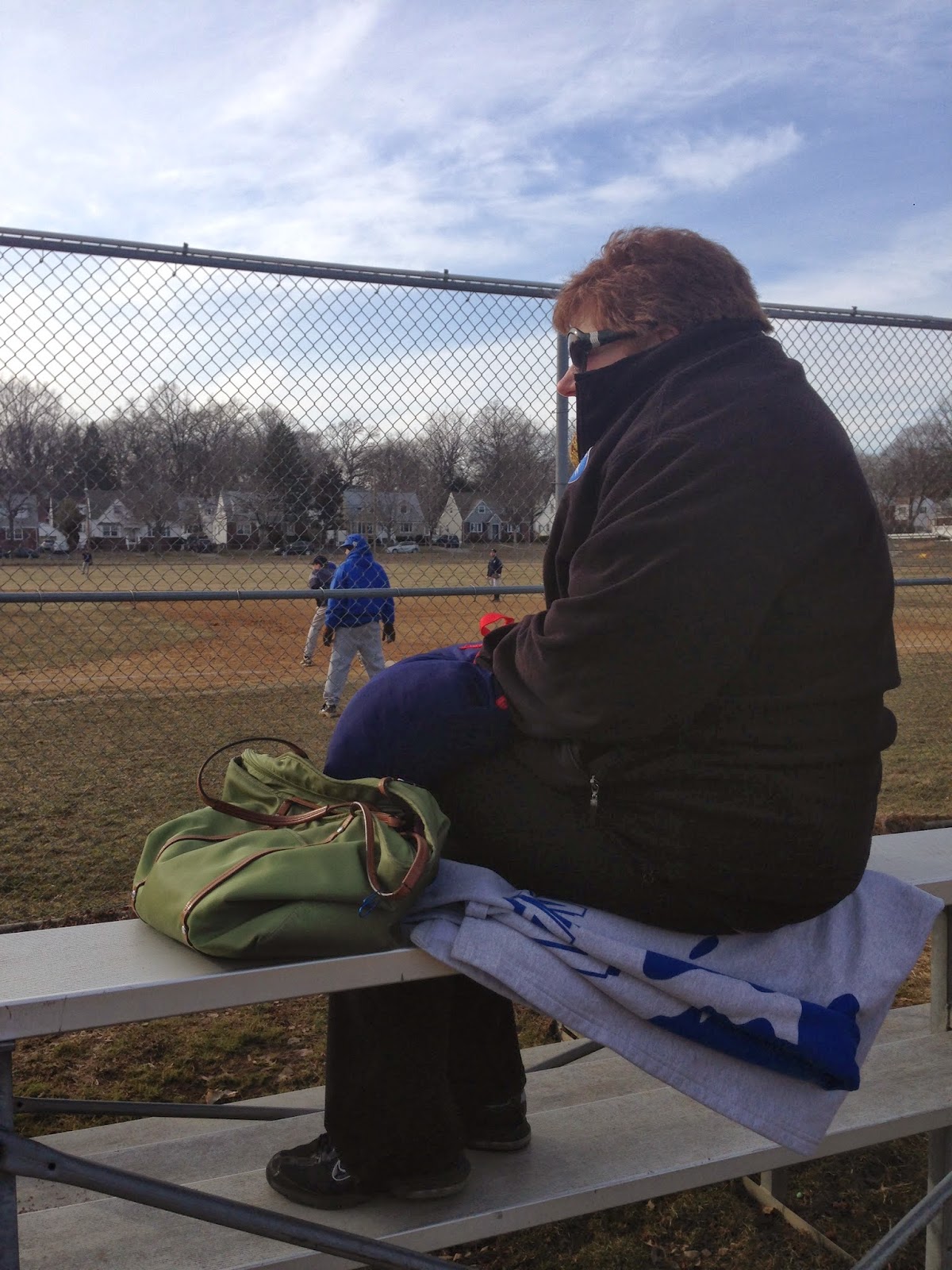 Yesterday with the temperature topping out in the mid-thirties, I spent two hours shivering on cold metal bleachers watching Leo’s baseball scrimmage. Yes, scrimmage. It wasn’t even a real game. Of course, it could have been worse. And it has been. When he was eleven years-old we braved a March ice storm to drive to a tournament in Virginia, assuming the weather would be better in the south. It wasn’t. While the boys batted through snow flurries, Leo’s best buddy, Koree, laid in the backseat of the car, teeth chattering with a fever too high for even him to play through.
I have watched thousands of youth athletic events over the past sixteen years. My three kids played sports round-the-calendar from a young age; soccer, basketball, baseball, softball and football. Then there were the sit-in-the-crowded-gym-for-six-hours-for-a-three-minute-performance sports. Molly was a competitive cheerleader for umpteen years and Max took up wrestling one year when his teacher was the coach. Leo, then in second grade, tagged along to the first few practices until it came time to strip to the skivvies for a weigh in. Leo had a habit of going commando in those days and so, to avoid an embarrassing moment, decided on the spot that wrestling was not his sport.
I grew up playing sports. I was a golfer, a field hockey goalie, tried a season or two of lacrosse and was a really good softball pitcher. These days, my knees won’t let me run the bases but I walk for miles and miles every morning.
My spouse played baseball and ran track and cross-country in high school. And he kept on running in college. After graduating, he played in a bunch of different softball leagues, just ran a half-marathon in January and goes to hot yoga three or four times a week.
So, I suppose it’s no surprise that we steered our kids toward sports.
As I sat at the field yesterday alone in the cold, my mind drifted from the game as it so often does. I got to thinking about how we raised our children.
Why was it OK for Leo to miss his sister’s high school graduation for a baseball tournament in Florida?  And how is it that I’m even entertaining the thought of letting him miss her college graduation for the same reason? How did my daughter talk me into letting her go to a private high school for a semester just so she could be on an award-winning cheerleading squad?  Did I really encourage Max to choose a college based on his football options rather than the other way around?
But then why did my heart break when Molly gave up cheerleading after her freshman year at UNC and Max gave up football to transfer to the University of Southern California where he now plays intramural basketball games?
What makes me systematically follow the stats of every kid I’ve ever known whose name appears in a box score?  How is it that I can talk for hours and hours about the sport of the season and I can’t contribute a thing to a conversation about Crimea?  And how is it that we thought it was more important to spend tens of thousands of dollars on traveling for sports than putting that money into a college fund?
These are the questions that were bouncing around in my brain as I sat on the stands yesterday afternoon in colder-than-football weather. For so many years we lived on autopilot with color-coded excel sheets sending me and my spouse in opposite directions to far-flung fields and arenas. Friends and family would simply shake their heads and listen politely to our sporting excuses for celebrating a week late or leaving an hour early or missing an event altogether.
I wondered, as I shivered, if we had had time to stop and breathe along the way, let alone discuss what we were doing, would we have done it differently?
I looked up in time to see Leo get a hit. And then I shivered some more thoughts.
I have to hope that all these sports taught my kids good life lessons.
That the world is bigger than they are.
That a quarterback’s pass is only as good as his receiver’s catch. That the best can get pinned and the worst can kick the winning goal.
That you don’t quit.
That other people matter.
And that sometimes your best friend will let you down and sometimes you’ll be the goat. Sometimes the routine you’ve practiced a thousand times will collapse in front of the judges, but other times you’ll nail it.
That you have to take responsibility and not pass blame.
That there will always be good coaches and bad coaches, and whether or not you agree with them, you have to respect them.
That shameless self-promotion only fuels the next game’s slump.
That a jammed finger, a torn labrum, and a bruised ego will all heal. If you let them.
That victories are short and defeats interminable. But even the longest games come to an end.
That it takes defense to win a game.
That disappointment is just another reason to keep going.
That having a father as a coach is a gift.

I hope they learned loyalty and dedication. Composure and perseverance. And to win humbly and lose stoically.

And at the very least, even if none of those life lessons sink in, I hope my kids have learned that wherever they are and whatever they do, they will always have a fan cheering them on from the sidelines.