I don’t have a Bucket List. After all, I have done just about everything I’ve ever wanted to do. However, if I were pressed, these would be the kinds of things that would top my list:
But, alas, these are not the things on which Bucket Lists are built.
No, I should want to go skydiving, climb Mt. Kilimanjaro or swim the English Channel to make my life complete. Or perhaps, as my friend Penny suggested (see my last blog for explanation on my old friend’s new name), I should zip line through a jungle and bobsled down a mountain in a poor Caribbean country that can’t possibly have the same caliber of sue-resistant safety precautions found in our conscientious USA.
In the weeks before our cruise, Penny and I talked about shore excursions. I suggested the Bob Marley Bus Tour which promised reggae, rum and an insider’s view of the Jamaican country side. Penny countered with the Tranopy Adventure.
“Go ahead, google it,” she suggested.
And so I did.
The tour starts with a 15-minute chair lift ride up Mystic Mountain, offering amazing views (if you’re brave enough to open your eyes) as you dangle 700 feet in the air over the canopy of the tropical rainforest. 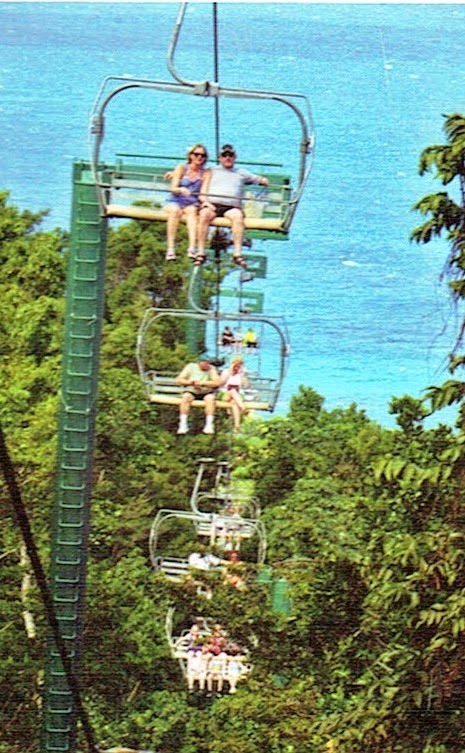 You then zip-line half-way down the mountain, “flying through the canopy on a series of cables and pulleys that are interconnected on both tree and land-based platforms.” If you live through that, you return to the chair lift, ride to the base of the mountain, loop around and head ever-so-slowly back up to the summit where you hop aboard a bobsled and “hold on as it plunges through 3,280 feet of twists and turns down the mountain.”
I had but three words for Penny.
“You’re surely joking.”
I went on to read some reviews mentioning “the vertical drop, the rickety bridge and this is not for you if you are afraid of heights.”
I am afraid of heights.
I last rode a chair lift on my honeymoon in Montreal. I wept the entire way to the top of the mountain. My spouse laughed at me. Once, while hiking in the Poconos, I came to a three-foot wide bridge with no railing spanning a deep ravine. I took five steps and froze. I tried crawling, holding hands, looking straight ahead, but nothing worked. I ended up tacking an extra mile onto my hike to avoid the perilous crossing. And when I took a 70-floor elevator ride to the observation deck at the top of Rockefeller Center, I couldn’t look down.
“It’s time we start doing Bucket List things,” Penny argued.
There was not a single thing in the Tranopy Adventure Tour that would have come anywhere near my Bucket List.
But Penny has a sense of humor and the next thing I knew, I received a text confirming our spot on the tour. It wasn’t cheap.
“I paid for it so you wouldn’t wimp out,” Penny said.
And for some reason, I didn’t.
As the eight of us gathered anxiously on a worn wooden platform, donned in our harnesses, helmets and disposable shower caps (to avoid Jamaican lice, said the guide), I tried to reason my way through what was about to happen. The wire could snap, my sweaty palms could slip off the handlebars, I could slam into a tree. Statistically speaking, I was probably safe. But statistics don’t keep your knees from knocking when your life is entrusted to a kid who answers your “Am I going to die?” question with “Yup!” a split second before he kicks the milk crate from under your feet and sends you zipping through the jungle.
I’ll admit, once I got going, it was kinda fun. Until, of course, I came to the end of the line heading 60 mph (which was probably more like 20), straight into a tree which was smack in the middle of the next platform which was suspended in the air. With no pillars gripping the ground. I screamed at the top of my lungs and the guides giggled as they zapped the brakes – some sort of contraption made of a pulley and a wooden block – in the nick of time.
What I didn’t realize was there were four more longer and faster zips to go, including a two-story straight-down drop followed by a walk across a swaying wooden bridge high above the tree line.
But, I did it.
By the time we rode the bobsled which they promised couldn’t derail, I was happy as a kid on a roller coaster. 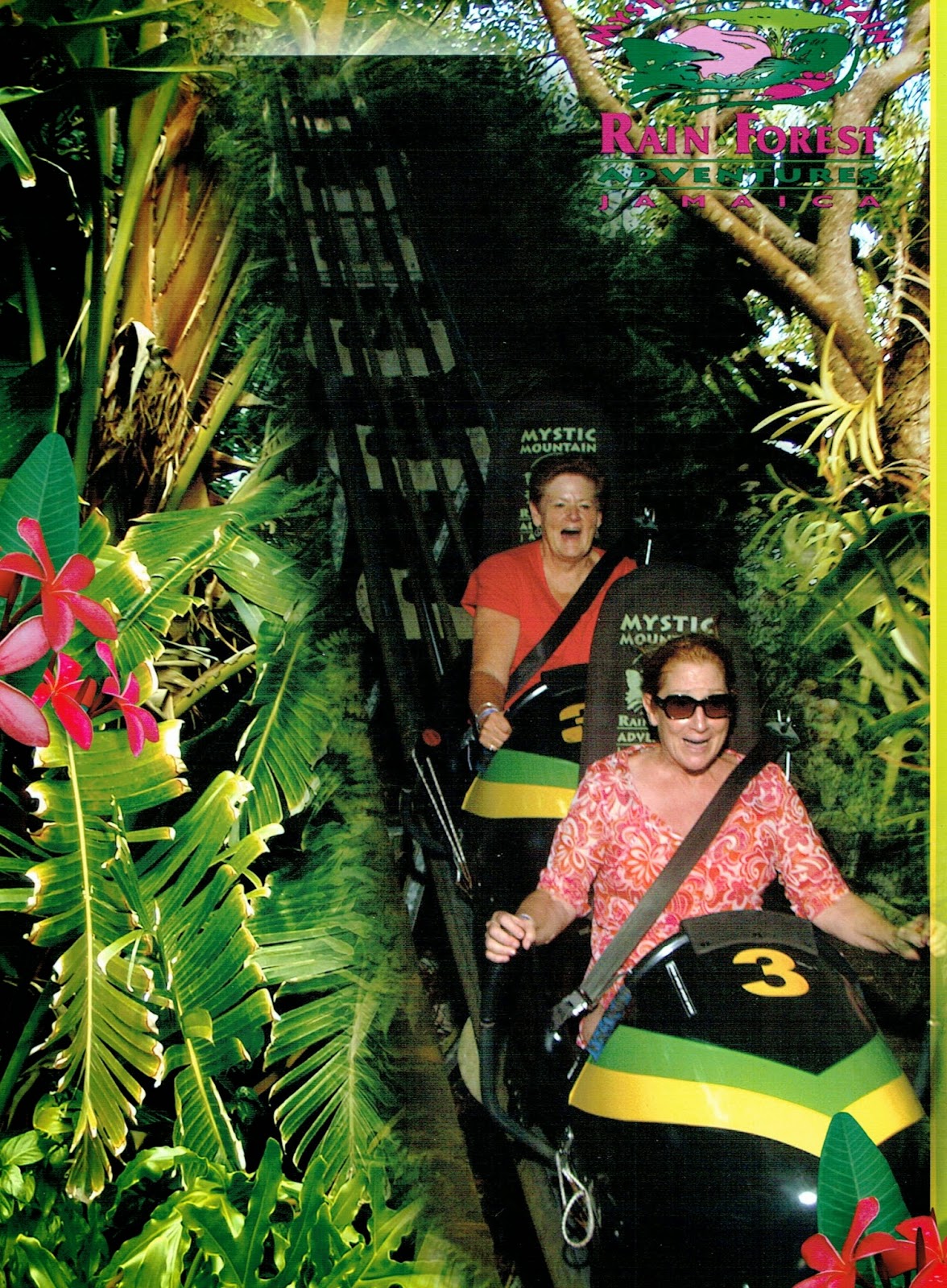 And by the last trip down the mountain, I found myself swinging my feet and even looking down over the side of the chair lift. I saw a mongoose scurrying through the rainforest as well as many, many big, big spiders weaving intricate webs an arm’s-length away. I saw our cruise ship in the distance and the beautiful clear blue sea. I saw green, green leaves and tall, tall trees and waved to tourists as they passed above us on their trip up the mountain. I barely even held on.
I can’t say I’ll never be afraid of anything again. Or that I’ll ever actually enjoy putting my fate in someone else’s hands. And I can promise you that I will never, ever jump out of an airplane. For any reason.
But I am proud of myself for doing something so totally out of character. I’m prouder still of Penny for prodding me to do it, knowing how I can get when my heels are dug in deep. But like all good bosom buddies, she also knows how far she can push and just what will motivate me to step outside my comfort zone.
“OK, so it might not be on your Bucket List,” she said. “But I bet you could write a blog about it.”