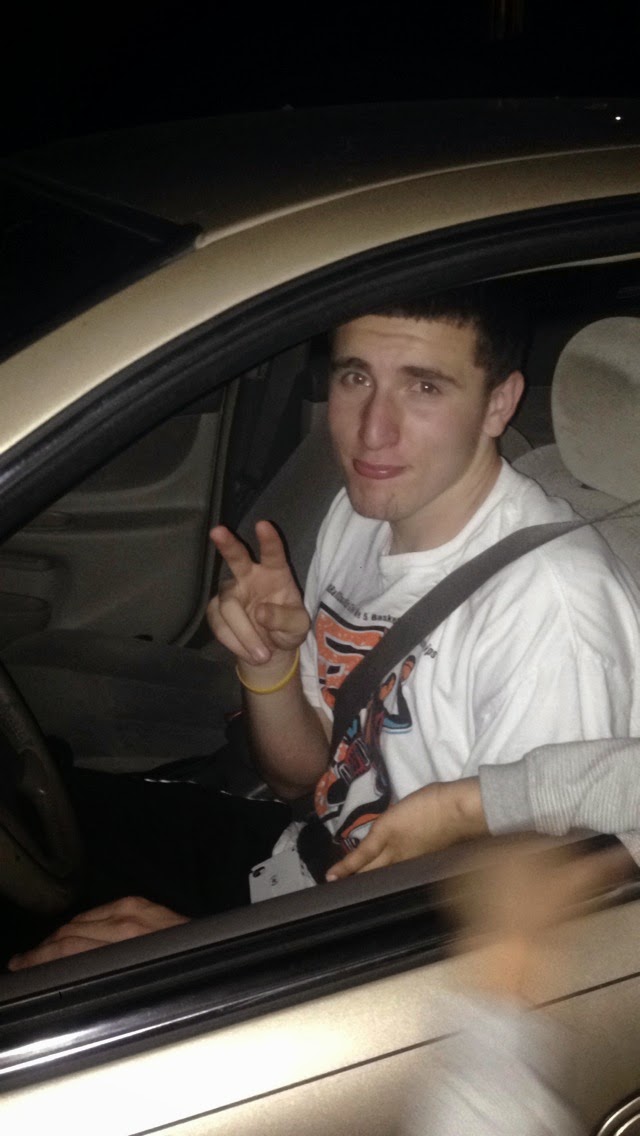 Last night I waited up until 1:30 am for Max to get home safely.
That in itself is nothing remarkable. But the fact that he’s 3,000 miles away puts a different spin on the story.
“Do you miss Max?” my friend Claire asked as we sipped Diet Coke and munched on pretzels at my very quiet kitchen table last evening. Leo was still away on his week-long bender in Aruba, Molly was off teaching history to at-risk fifth graders in New Orleans and Max had flown back to Los Angeles on Saturday under the guise of a good job that started on Monday.
“You know, I’m really good at the whole out of sight, out of mind thing,” I confessed and shoved another pretzel into my mouth.
Max did all my grocery shopping for me this summer. I would rather clean bathrooms than go to the supermarket, so that’s what I would do when he made his twice-weekly run for cases of water, bottles of lemonade, liters of Pepsi One and tubs of shrubbery (as my ever-loving spouse calls my over-priced, pre-washed salad greens). He chose produce and meats with care and always made sure he picked up some chocolate mint chip ice cream along with his vanilla when it was on sale two-for-five-dollars. If he wasn’t sure of one of my many product peculiarities, he’d text a picture and I’d yea or nay it.
Max had an internship in the city this summer and though I peeked in his room every morning, fully expecting to see him curled up under the covers, he never needed a parental push out the door. Max’s friends are fun and personable and clean up most of their empty bottles in the basement. Max’s girlfriend, Oksana, brightens my mood the minute she enters the house. She is happy and kind and helps me set the table. She talks to me when no one else will and understands exactly how I feel about our Marmaduke clone, Griffey.
So, really, what’s to miss?
I hadn’t heard from Max except for an “I’m alive,” text eight hours after his plane landed. In the ensuing days I’d gotten a text or two with a hand-waving emoji or heart. But I hadn’t talked to him, nor did I expect to, any time soon.
And so, when Max called on the house phone last night at 11:45, I was a bit baffled.
“Momma,” he said hesitantly. “I’m in a little bit of trouble.”
Pause.
“You’re not going to be happy with me.”
I am always amazed at just how quickly and ferociously thoughts can swirl through a mother’s head as we wait for the axe to fall.
These are the words I was sure I would hear next: I can’t go to school this semester due to lack of funds, grades or another unimaginable scenario. But,  I have to stay here because I have a year lease on my over-priced apartment.
Which led me to: I realized that my over-priced rent is really, really over-priced because I thought the price on the lease I signed was for the four of us to split, not a piece!
Segueing into: I lost my debit card and all my money is gone and the bank says I can’t get it back because I didn’t notice for three days.
And finishing off with: I got arrested and have to stay in jail until you post bail and my cellmate murdered his mother.
The good thing about bracing for the worst is that when the truth comes out you can say, “Oh, is that all?” and mean it.
“I borrowed my roommate’s car to go to Target.”
There goes the mind again :  I got a speeding ticket. I ran over a squirrel. I ran over a dog. I ran over a human. I ran out of gas in a really rough neighborhood and three, no four gang members are heading my way. I totaled the car.
“And I lost the car key.”
Oh, is that all?
“I know this is my problem but I’m just asking for your advice,” he said. “I really don’t know what I should do.”
It was close to midnight and I was tired and not really sure what he should do either. After all, my mind was still on the bail bondsman.
Max had not yet told his roommate of his dilemma because he knew, because he had been told, that there was no extra key.

Max is not a chronic loser neither in personality nor of possessions, so I kept the obvious lecture and follow-up questions to myself.

“Call the police,” I suggested. Then I wondered, does he have his driver’s license, registration, insurance card?
My  brain kicked into gear and came up with the obvious solution. Locksmith! He’s in a major city; there’s got to be a 24-hour locksmith. And besides, it’s only 9 pm out there.
“Let me know what happens,” I said.
Fifteen minutes later, Max texted that he had gotten through to the answering service of a locksmith who would be calling him right back. I asked for the name of the company and immediately Googled it.
There were at least a dozen Yelp reviews all ranting about how they had been ripped off by this locksmith. The guy was apparently the biggest crook around, demanding cash and doubling, tripling and even quadrupling his on-phone estimates.
Is this where you let your six-foot-three, 3000 mile away-from-home, grown man learn a lesson of how to deal with con men in California? Or does the mother in you kick in, knowing what easy prey your poor little all-alone boy is, panicking in a Target parking lot in downtown LA, scared to death that his roommate is never going to speak to him again?

I found a place somewhere in the middle. I Googled and Yelped until I located a locksmith with glowing reviews and passed the number on to Max. It took everything I had not to call myself.

Meanwhile, on another front, Molly e-mailed me from New Orleans.
“Lost my phone last night.”
But that’s another story for another time.

Do I miss my children?

They may be gone, but they’re never forgotten.