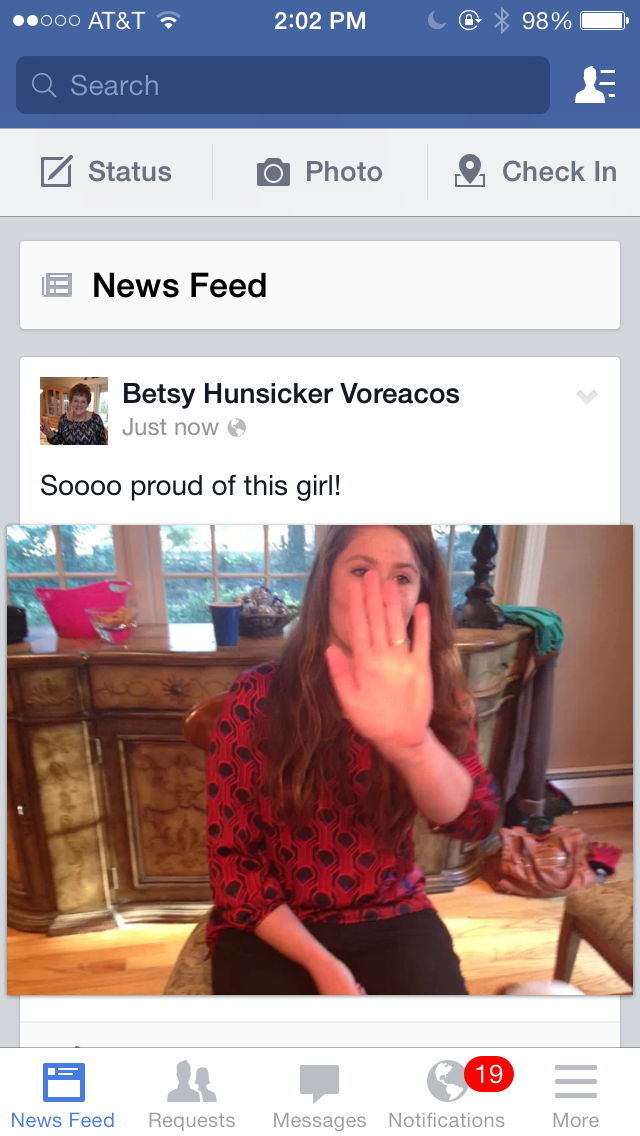 “Why is it, that you are the ONLY mother out there,” Molly began (and I cringed). “That doesn’t post nice things about your children on Facebook?”
I let out a sigh of relief.
Through the years I have been accused of being the ONLY mother who does and the ONLY mother who doesn’t, the ONLY mother who ALWAYS and the ONLY mother who NEVER, more times than I can count. And whether or not the allegation is true, it is usually followed by a major wave of guilt and a self-deprecating self-appraisal of how I’m raising my children. But, the not-posting-praises on Facebook, well, that doesn’t even warrant a second thought.
But, then again, maybe I’m wrong. After all, I’m the ONLY one not doing it.
I envy my mother and father. They came from a generation that could parent without guilt. If my mother didn’t make it to every one of my field hockey games, or if she had to leave early to put the pork chops in the electric skillet, she didn’t lose sleep over it. And she certainly didn’t give me an extra helping of applesauce to make me feel better.
These days, if a parent misses a game, it means a dinner out, at the very least.
My parents loved me. I know they did. They had to divide their time by four daughters and they did it without making any of us feel neglected. And while they did their fair share; my father coached softball and my mother drove the car pool, they didn’t find it necessary to throw a graduation party every time I changed schools. Nor did they post lawn signs with my softball jersey number when we won the championship. And they certainly didn’t brag about my accomplishments at the bridge game on Wednesday night. It was just the way the world was. We were kids. Our parents were parents and we didn’t fuse seamlessly into each other’s lives.
My parents were proud of us, I know they were. They were proud that my two older sisters were National Merit Scholars and they were proud that my little sister was the school mascot. They were proud that I was a good softball player and I know my father was secretly proud that my friend Margaret and I, as catcher and pitcher, had mastered the fine art of unnerving the batters and almost heckled ourselves right out of many a game. And every now and then, our ears would perk up when a parent retold a tale worth telling, and our hearts would swell. But it was certainly not an everyday occurrence.
I didn’t realize the world had changed until I was well into my parenting tenure. At first, I thought it was just the people whose company I happened to fall into who over-loved their children. But then I realized, EVERYONE was over-parenting, over-praising and over-involving themselves in their children’s lives. This didn’t sit so well with me because I’m way too selfish and way more interested in getting personal praise than soliciting it for my offspring.
By the time Molly graduated from kindergarten, I was somewhat on board, arriving at the “moving up” ceremony an hour early with the other parents jockeying for prime positioning. But I didn’t scream, “That’s my baby!” when she walked across the stage. I clapped politely, knowing there would be plenty more graduations in her future. When she performed in her first cheerleading competition, I didn’t send her a Candy Gram. Nor did I hand her flowers for doing back flips. Instead, I clapped politely, knowing there would be plenty more wins, and many more losses in her future.
When my boys won their athletic awards along the way, I didn’t pose them for pictures on the stage and send them into the local newspaper. Instead, I mailed copies to their grandparents who smiled politely, knowing there was a whole lot more to life than being the best 11 year-old player in a town football league.
Don’t get me wrong. I’m the first to support the over-achievers of America. I have clippings on my refrigerator documenting the doings of kids we’ve encountered through the years. There’s an article about Anthony Apreda and his cannon of a baseball arm. There’s a picture of the graceful Ruby Mather doing a split in mid-air. There’s a baseball card of Alec DeMattheis, who can bench press 5000 pounds. There’s a piece of artwork from Koree Hargraves, who luckily plays basketball better than he draws and there’s even a newspaper picture of Jackie Robinson stealing home in the 1955 World Series.
It must be hard for my kids to be surrounded by so many kids who are so much better than they are. When my spouse coached Little League, no matter how good my boys were, he always gave the Most Valuable Player trophy to someone else. Today, everywhere they turn, a friend is being shouted out on Facebook, on Twitter, on Instagram. Parents have turned these social media tools into resumes for their kids. And, I don’t blame them. I just don’t do it.
“But, Mom,” Molly asked. “Aren’t you proud of us?”
I usually just roll my eyes.
But I’m pretty sure they know the truth. Even if I don’t post their progress and tout their talents, inside I’m screaming just as loud as the rest of them, “That’s my baby!”
And when all is said and done, it’s not the honor rolls and the college acceptances and the top player awards that are important to me. When I look at my kids and see that they have turned out to be humble, honest and decent human beings, my insides smile.

And that’s what makes me the proudest parent out there.