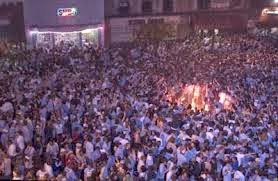 “That should have been us,” my daughter, Molly, texted after the University of Connecticut’s men’s basketball team won the NCAA National Championship last night.
“Well, at least Kentucky didn’t win,” I responded. Kentucky is second only to Duke in evilness to a University of North Carolina basketball fan.
“I truly can’t imagine anything better than winning the championship while you’re a student,” she lamented.
Our family friend, Megan, who graduated high school with Molly, got to celebrate the sweet victory of an NCAA championship twice in her four-year stint at the UConn. And UNC never even made it to the final four.
I know how Molly feels. After all, I’ve followed the Tar Heels for the past four years and if I passed the likes of Kendall Marshall or Tyler Zeller or Marcus Paige on the streets of Manhattan, I would actually recognize them.  And I’d probably stop and ask if they were interested in marrying my daughter.
The year before Molly graduated high school, UNC won the national championship. And that’s what Molly and her roommates dreamed of experiencing at least once in their four year tenure in Chapel Hill.
But, it just didn’t happen.
I’m a huge sports fan, so I understand. My heart hurts when kids I’ve never even met lose a game. I cringe when they miss their free throws; I ache when they tear their ACLs and shake my head in dismay when they get declared ineligible for their bone-headed shenanigans.
I get it. I really do. I still have my varsity letters and newspaper clippings and a little gold golf club I wear on a charm bracelet. Perched on my bookshelf is a softball inscribed with the words, “It proves what hard work can do,” written by my father who coached me to a championship. My kids have more trophies on their bureaus than I can dust and I’ve watched more of their games than I can count.
But sometimes, at the end of the day, whether it’s a regular season high school baseball game or the Super Bowl, I have to tell myself that in the whole scheme of things, it’s just a win or a loss and nothing more.
Still, there’s nothing better than sitting in a stadium cheering for a runaway running back. There’s true joy in watching a walk-off home run. And nothing can beat the excitement of a buzzer beater basket.
When your team loses, you hang your head. You replay the plays. You criticize the refereeing. You second-guess the coaching. You question the athleticism, the dedication, the hype. But, you’re a fan, so you keep on cheering.
Molly will always remember the times they beat Duke. And she’ll never forget when their hearts were broken at the buzzer. But, she’s also going to remember getting the bid to join her sorority, getting accepted into Teach for America and getting her first college A. She’ll remember the Carolina Cup and the Eve Carson Memorial Run and Midnights with Roy. She’ll have fond memories of quiet nights watching Nashville on TV with her roommates and of the debaucherous times when Bar Carr was filled with friends.
She’ll remember criss-crossing the brick-lined paths through campus and eating cheeseburgers at Sutton’s. She’ll remember some of the boys who made her swoon and all of the professors who made her think. She’ll remember the dance marathon and the sorority dance competition. She’ll remember being a cheerleader and an orientation leader. She’ll remember when she stopped referring to Carolina as school and started calling it home.
No, Molly won’t get to remember storming Franklin Street in a sea of Carolina blue after an NCAA championship victory. And she’ll always be a little bit jealous that Megan got to do it twice.
But, in the end, she’ll understand that it’s not always the big moments that make the best memories.
And that all her best memories belong to UNC, no matter how they play the game.