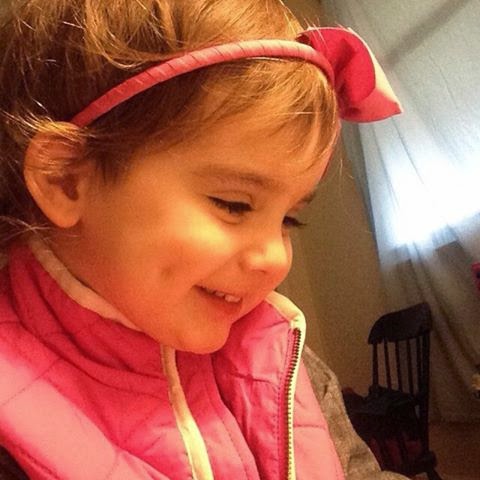 Sophie turned three last week.
She’s my favorite nephew’s daughter and cuter than any kid I’ve ever seen in my life. Including my own.
“How could you stand it?” Molly asked after we spent the day with Sophie in Pennsylvania over the Christmas holiday.  “Didn’t you just sit and stare at us in awe when we were little?”
Oh, Molly. You have no idea.
Every Sunday in church, my spouse and I position ourselves in the pew right behind the Peters family. Jack and Karen are about our age, but because they wed when they were mere youth have been married ten years longer than we have. Thus, their two thirty-something daughters who each have two children of their own compared to my three distant, but still dependent dependents. I watch those four little grandchildren, who run a close second to Sophie in adorability, squirm and squiggle and get whisked out of the sanctuary when the squeals turn to shrieks. As I make peek-a-boo faces at them during the Lord’s Prayer my spouse wiggles four fingers which means, “Let’s have a fourth child.”
There was never a part of me that wanted four children. When Leo was born, I knew I had reached my limit. My spouse, so wise in parenting matters, knew I had exceeded my limit two children back. But now that our youngest is eighteen and none of the kids live at home full-time anymore, I have begun to understand the appeal and awe of parenting – as long as it’s through the eyes of a grandparent, or a great-aunt, or an unrelated bystander.
When you have three children in rapid succession, every day is a race to the finish line. The clock ticks interminably slowly toward that blessed hour when the last little angel puts his head down on the pillow. And stays there.
The house is a constant chaotic mess. Three-tired trucks, headless dolls, mismatched shoes and dirt and dust and more dirt are the focal point of the foyer. Portable cages decorate the living room, posing as play pens; books with torn-out pages line the coffee table; half-chewed cheerios and drippy sippy cups find their home under the couch cushions. When the doorbell rings, your heart hardens in horror and you greet your visitor on the front stoop, using a sleeping baby as an excuse for the closed door behind you.
You muddle your way from meal to meal, movie to movie, fight to fight. You bribe, you threaten, you cry.
You feel constant guilt.
Because you aren’t good enough. Kind enough. Fun enough. Strong enough. Smart enough. You’re never enough.
You want more than anything to work full-time but would never, ever say those words out loud. You pray, on your hands and knees, that your spouse will come home early and witness the witching hour, just once. But, alas, he is the one working his tail off so that you get to stay at home with the kids.
Instead, you hire babysitters and join committees and become PTA president and run sports leagues, just to get a night out. You make play dates and go to museums and zoos and parks and story hours at the library under the guise of culture, but you know it’s really just to tire the tikes out.
You get a dog.
And a mini-van.
And start researching boarding schools.
And eight-week-long sleep-away camps for summer vacation.
But you can’t afford either the guilt or the cash and so you rent a house at the beach instead. And after 24-hours of sandy diapers, soggy snacks and sunburned shoulders, you swear you will never voluntarily sit on a beach again as long as you live. Unless you have an umbrella drink on one side of your chair and a BFF on the other.
Which isn’t to say that you don’t take great pride and joy in raising your exceptional children. You keep detailed baby books and meticulous medical records. You write down all the adorable things your precocious daughter says and worry that your sons are simple. You take lots and lots of pictures and read lots and lots of books and make lots and lots of meals filled with vegetables that are never, ever touched.
And somewhere in the midst of it all, they learn to tie their shoes and dress themselves. They pour their own cereal and their own juice, which way too soon becomes soda. They learn to swim and ride a bike and throw a ball. They walk to the bus stop alone. They go on sleepovers. They go to sleep-away camp. But never for longer than a week or two at a time. They join teams and clubs and start choosing their own way in the world. They learn to cook. An egg, then pasta, then brownies. But never broccoli. They learn to drive. And fill out college applications.
And finally they learn how to live with someone who is not you.
That’s just about the time when you catch your breath and start wishing you could take it all back. You’d be more patient and less selfish. You’d be more loving and less frantic. You’d care more about what your family thinks and less about what the world thinks.
And for sure, you’d do just what Molly thinks she will do. Sit and stare at your kids in awe.