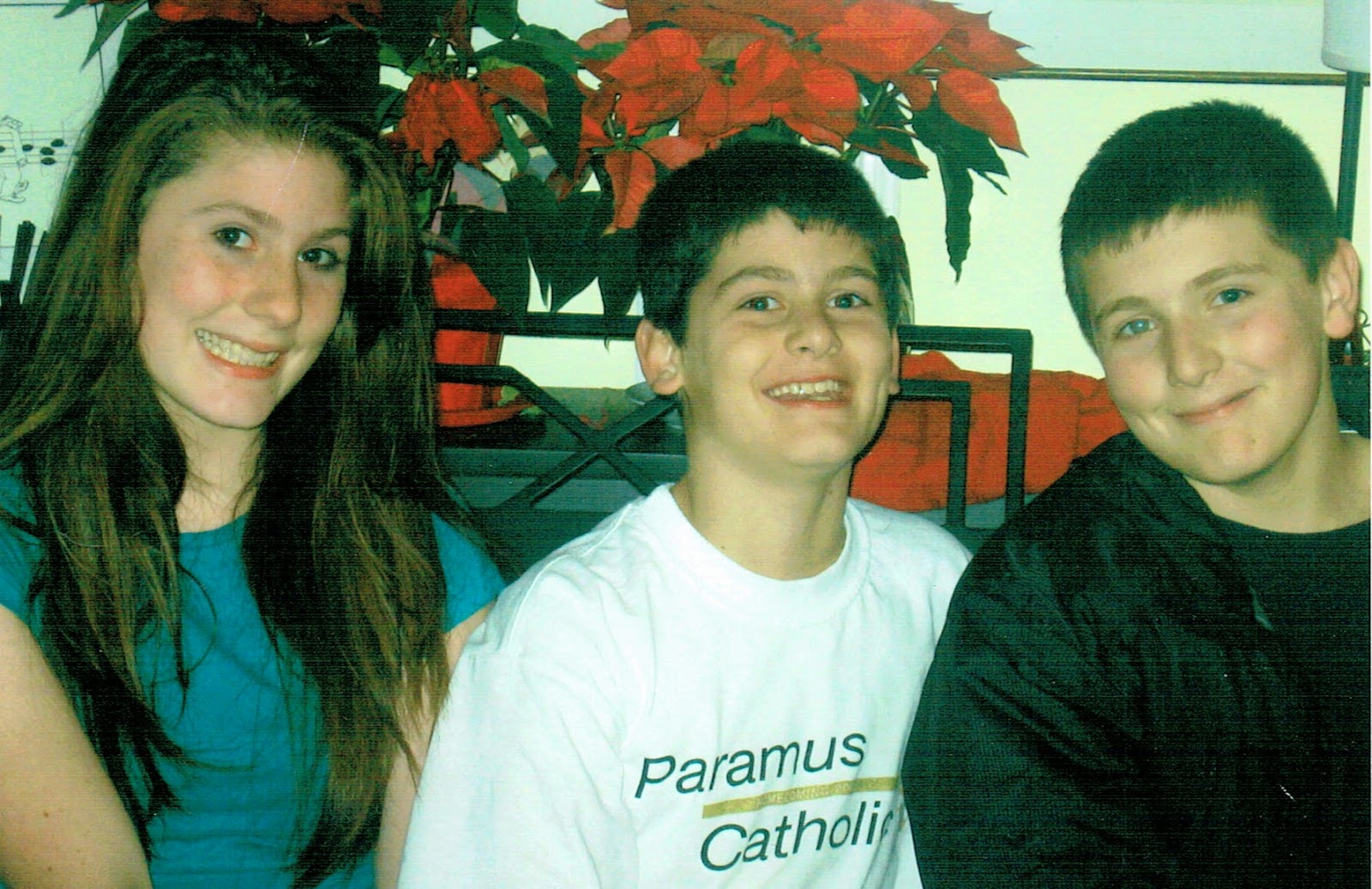 “Hey, where’s my Christmas picture?” my friend Laura asked in an e-mail on December 20, 2006.
Laura is a keeper of e-mails and other fond memories and recently re-sent me our eight year-old electronic conversation. While I don’t remember all the details of that specific day, it was so typical of my former life that I don’t for a minute question it’s authenticity.
Molly was 14, Max was 12 and Leo was 10 years-old. I no longer had to tie their shoes or pour their juice, but I still had to cook their meals and wash their clothes. I didn’t have to read them bedtime stories, but I still had to monitor their homework. I could finally leave them home alone, but when I was home, they still didn’t leave me alone. The physically demanding years had passed and I was on to the emotional challenges that only adolescents and teenagers can incite.
And so, here is how I responded to Laura’s question eight years ago.
Where‘s my Christmas picture?

“It’s coming,” I wrote. “We had a big fiasco about it. I was so overwhelmed (what else is new?) with hosting the All Girls’ Annual Christmas Party last weekend, then shopping, having 3-6 extra kids here every day after school, sports, writing the church Christmas pageant, directing it, acting in it and then buying and decorating a tree, jumping into the car and driving to Philadelphia for yet another party on Sunday.

I have a friend who is dying of lymphoma and I have more or less adopted his two younger kids so the mother can work when she can and care for him. He just got out of the hospital yesterday after seven weeks which makes me nervous cause I’m afraid he’s going to get a fever and have to go back in before Christmas. The kids are a major handful. The boy is 11 going on 40 (he’s good friends with Leo). The girl will be 9 the day after Christmas and is simply adorable and I love her madly but she does need quite a bit of loving attention (though what can you expect, her father’s been sick for five years).
Anyway, I say to spouse, “Spouse, how about it we do something really radical this year and send out cards without photos?”
I got some sort of grumble in response, so took that as an assent and proceeded to buy actual Christmas cards for the first time in 14 years. I signed and sealed about half of them on Tuesday night and when aforementioned spouse saw them sitting on my desk said, “I thought we agreed we were going to send out pictures.”
“We have no picture. There’s no way we’ll get them out in time,” I say.
“I’ll come home from work early tomorrow and take the picture,” he counters.
“Fine,” I pout and give him Wednesday night as a deadline, knowing they won’t make it for Christmas no matter what we do.
Also knowing that he won’t get home early from work, I assemble the offspring on the front porch to take the picture. Kids are rolling their eyes, I’m screaming, “Why do you have to fight about this EVERY SINGLE YEAR?”  Neighbors are gawking.
Koree, a semi-permanent fixture in our house, impales himself on our fence while playing basketball. His brother Kris keeps coming to me to saying Koree’s hurt, Koree’s hurt. I think he’s faking it because he and Leo had a fight.
I move the children inside when Leo refuses to smile because he hates Koree who is his inseparable best friend. Meanwhile, Molly says the picture won’t work anyway because we have no attachment for the computer. I have no idea what’s she’s talking about, having never touched the digital camera in my life.
Koree comes in crying and can’t open his eye. I grab a bag of frozen peas and put him on the couch.
I line up my three in front of the fireplace for seven more pictures, all of which are nixed by Molly.
Jaelin calls from outside that he’s hungry and asks if we are still getting pizza.
“ONLY IF THESE KIDS COOPERATE!” I scream with an added, “You’re scared of me, aren’t you?”
I note that Anthony (son of the aforementioned sick father) is holding a tape recorder. I tell him he better erase every single thing he’s recorded or his parents will never let him come to my house again.
Finally, I take a picture in front of the piano. Decent, but not great. I order the pizza and drag Molly with me to CVS. I had no idea you could get pictures printed up instantly! You know how many years I took pictures, got them developed and had to redo the entire card? These kiosks even take out the red eye! It’s so quick, but because I ordered 80 cards and was so enthralled with the machine, it took a full 20 minutes before we were off to get the now-cold pizza.
Got home. Koree had risen from the couch and the peas were strewn across the hardwood floor.
“My mom called. We have Riverside tonight.”  (That’s where they play basketball – at Riverside Church in Manhattan).
Practice starts at 6 o’clock and it’s now 5:30 and I’ve just walked in the door with the pizza. I have forgotten all about practice.
I call the mother of Koree and tell her there’s no way I can get them into the city and she’ll have to drive. She barrels over and loads Max, Leo, Kris and Koree into the car, all with greasy pizza in their hands.
Anthony and his sister Christina were picked up by someone, somehow in the chaos. Jaelin can’t find his cell phone and is now in tears. His mother calls my cell phone which has horrible reception in the house and says she’s on her way. We scramble to find the phone and it was recovered.
All the children were now gone except for meek (in a good moment) little Molly. Kris and Koree’s mother calls and says there was no Riverside practice for the little ones after all, so she’ll bring them home, but I’ll have to go pick up the older ones at 8 pm. Which I did, and sat outside until 8:36 because practice ran late.
Came home, finished the cards, stamped them and will be dropping them in the mailbox this morning.”

This year, after Thanksgiving dinner, my kids assembled themselves on my sister’s couch. What a perfect opportunity to revive the Christmas picture tradition, I said. And as I started snapping, it became abundantly clear that 2006 will live in infamy as the last year a Voreacos Christmas picture was ever sent. 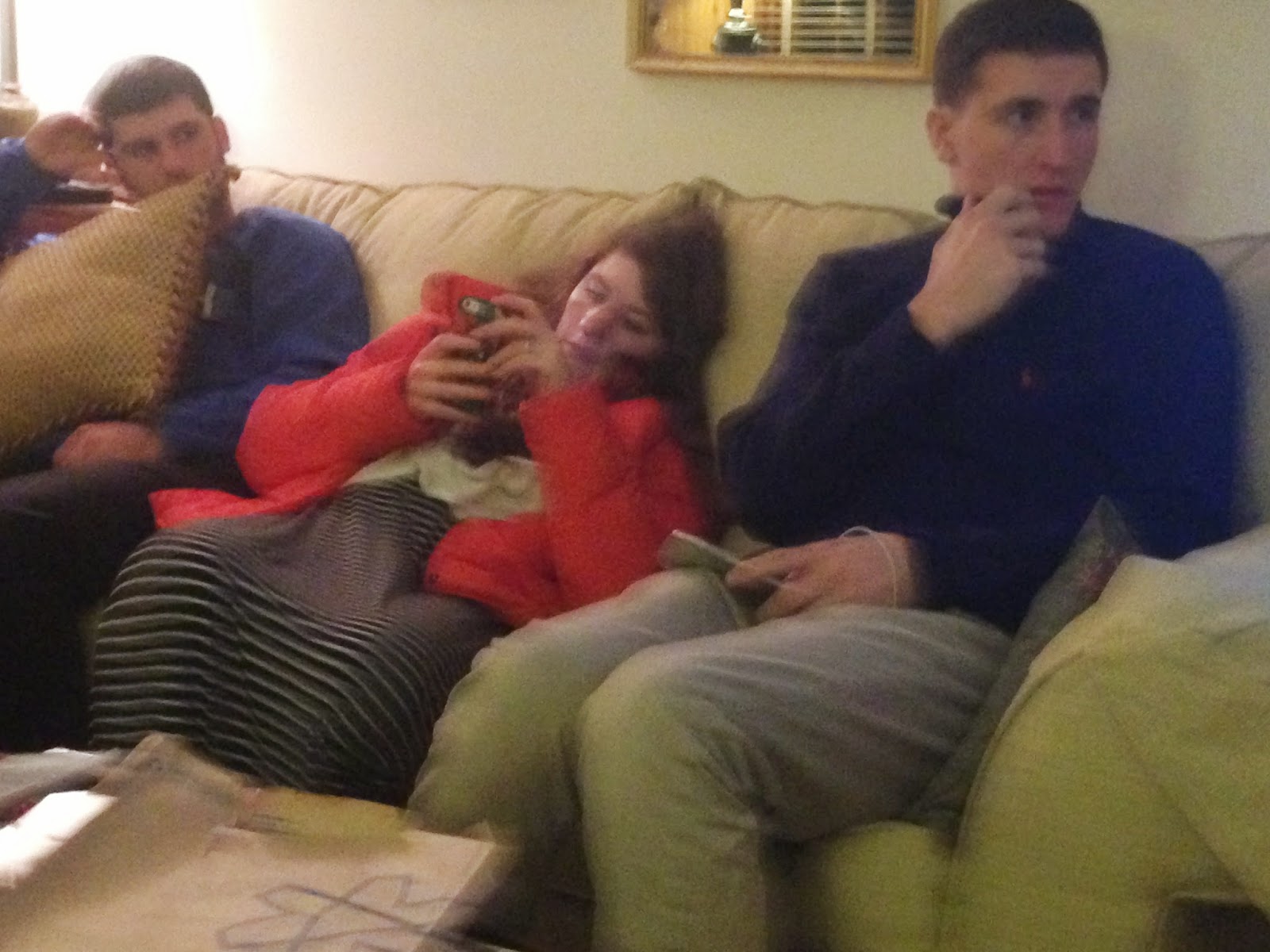