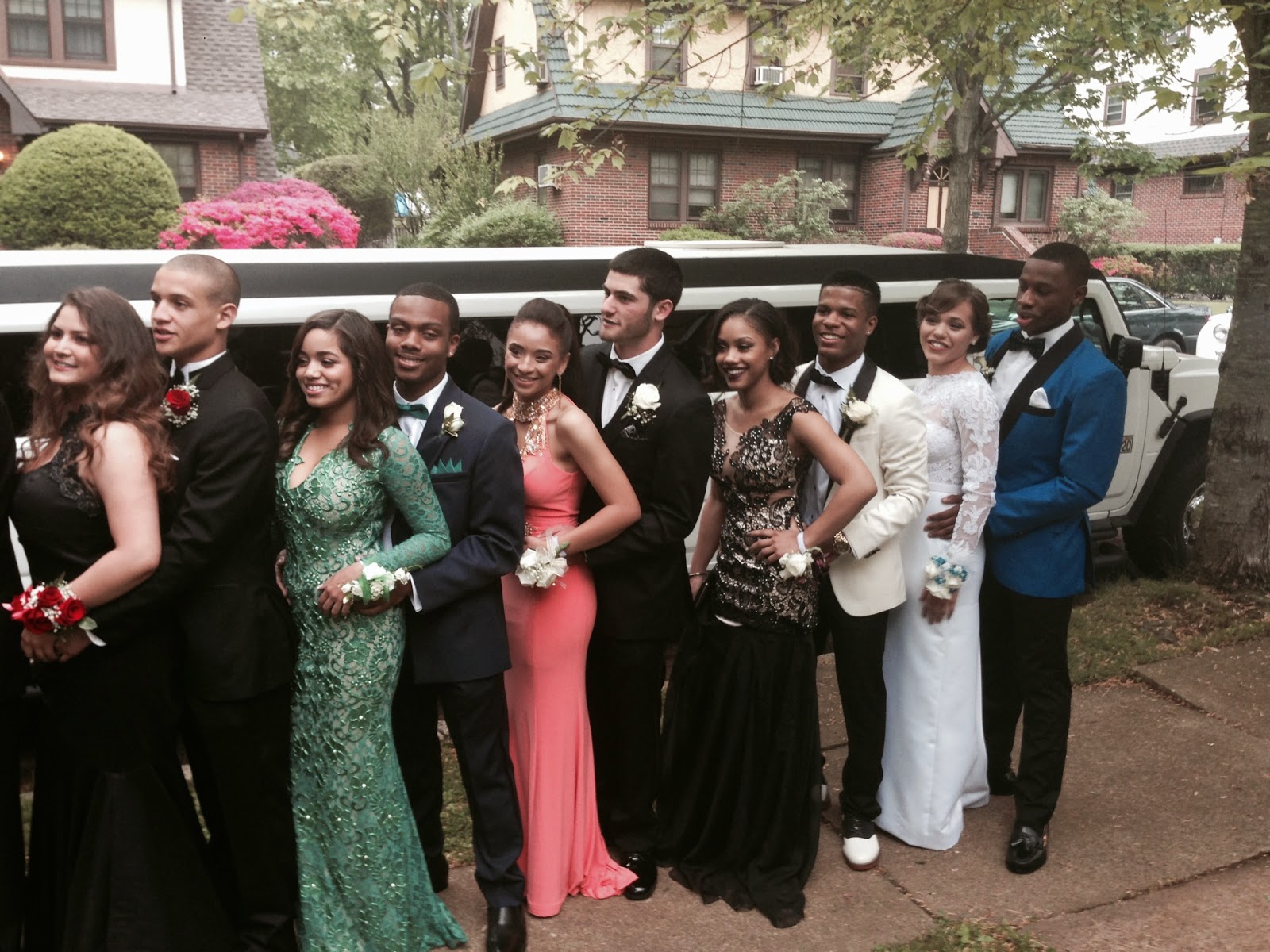 Twenty-two high schoolers, along with their snap-happy friends and families, gathered at my house on Thursday evening before Teaneck High School’s senior prom. I spent most of the day fretting that the skies would open and 50 plus people would be traipsing in and out of my house, jockeying for prime picture-taking position. But, as it worked out, the rain held off except for a few passing sprinkles.
Of the eleven couples who rode in the limo together (yes, one limo can actually hold that many people), only one, maybe two and sometimes three (depending on who you ask) are truly boyfriend and girlfriend.
Leo went with a beauty named Brittany who used to live in town but had moved to New York a few years back. They were friends and nothing more but took lots of pictures together. After an hour-and-a-half or so, the lengthy limo left my house and headed to the Show Off, a town tradition at which the kids do a red-carpet parade around a parking lot, showing off their gorgeousness to hundreds of onlookers. Then they all file back into the limos and party buses and rented Rolls Royces and head off to the prom to make their memories.
When I got back home from the Show Off, after propping up the stomped dahlias and downing a bottle of wine with Angela, the mother of Leo’s oldest and dearest friend, I dug around until I found my own senior prom picture. Singular.
I was standing in front of the living room fireplace in the least offensive polyester print gown that fit both my mother’s budget and my obese-by-teenage-standards size-14 body. It was green and orange and white and flowed to the floor with a deep V-neck, safety-pinned to prevent any bosom from peeking out. I clashed terribly with the light blue walls in the background. My date, Constantine, is not in the picture.
My group of friends in high school spanned two grades so we concocted an elaborate scheme to assure everyone would be able to go to the prom. That meant a senior girl may go with a junior boy, or vice versa. We’d all go together as friends and have a ball despite our 70’s contempt for anything as traditional as a school dance.
I almost didn’t go because I drew Const as my date. A normal girl would have swooned; he was the epitome of cool with his introspective blue eyes, half-cocked smile and understated swag. He played a mean Stairway to Heaven on his guitar and held the heart of many a girl of a certain ilk. But I knew he was only going with me because his ex, and future, girlfriend Patty arranged it. I knew he was currently in love with Debbie who was the blondest and thinnest of the bunch. But she was already going with another of one our friends. I was insecure enough to believe Const was embarrassed to be going with the likes of me.
Const wasn’t in my prom picture because I told him to meet me at Patty’s house. There was no way I was going to force him into coupledom when the whole date thing was so contrived. I had to act as cool as he was and pretend that I wouldn’t have loved a picture of the two of us to have and to hold for all eternity.
The dozen of us who went together borrowed parents’ cars for the evening. Only the rich and famous rented limos in our day. We went to dinner first at Tiffany’s in Blue Bell and then off to the prom at some random country club in the middle of somewhere. We had spent hours lamenting the choice of The Way We Were as our prom theme, lobbying heavily for something more appropriate like, One Toke Over the Line. Yet when the sappy sound of Barbra Streisand belted out “Memories…like the corners of my mind,” even the coolest of couples couldn’t resist. I, of course, beelined to the sideline, but Const grabbed me and led me to the dance floor. I had never slow-danced in my life, but it turned out he was no Fred Astaire himself. We kind of hugged each other and pushed each other around in a circle until the song ended. When he tried to give me a friendly kiss at the end of the dance, I did what I did best. I ran away.
I had the time of my life at my senior prom.

As those twenty-two glamorous girls and good-looking boys trampled my newly-planted dahlias on Thursday, I couldn’t help but think how some things never change.

They may spend more money on the prom than we did, but like us, they know what it’s really all about. It’s not the dresses or dates, hairdos or limos that make the night. It’s not about awkward photos or even more awkward kisses. It’s about being with the best of your best buddies, both boys and girls.  It’s about making memories that will last a lifetime. Memories that ten, twenty, fifty years later will make us all stop and smile, and remember with fondness the way we were.