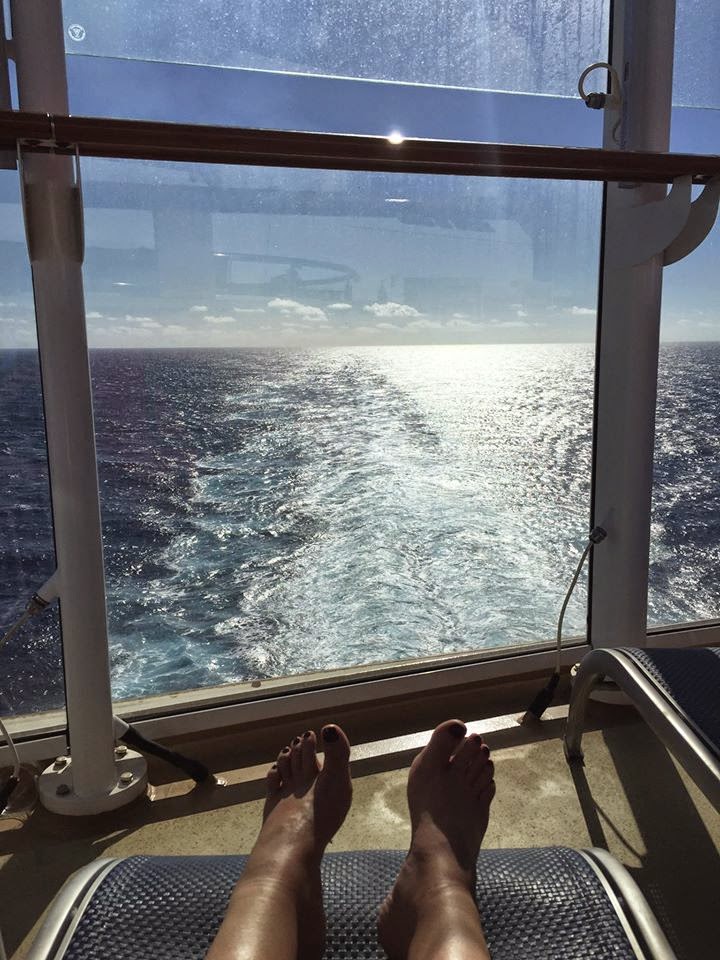 One short week ago I was whining about my rapidly melting strawberry daiquiri while basking in the sun on a mega-cruise ship. My friend Jean and I were debating the merits of an off-season tan. I, fair and freckled, favored Bingo over burning and blistering for color that would fade 48 hours after crossing the Mason-Dixon line. Jean, on the other hand, believes that a tan is as essential as highlighting your hair and painstakingly repositioned her lounge chair every 15 minutes to optimize the effects of the ultraviolet rays.
I am not an easy travel companion. I don’t go anywhere without my portable fan. I can’t sleep if I hear someone breathing. I insist on eight hours of sleep, even if that means staying in bed until noon. I wake up to go to the loo three or four times a night. And I have an annoying need to befriend everyone I meet regardless of their stature in life.
Jean has her issues as well. But none of mine. She worries about missing a plane. Or the plane going down. She worries about getting seasick or contracting Norovirus. She thinks about germs and misses her children. And she has no desire to know where the family with the matching neon shirts in the buffet line is from.
Jean is the funniest person I know. And one of the few people in the world who can make me laugh out loud until I’m gasping for breath, not to mention crossing my legs. We are similar in that we are both prone to over-doing and over-spending. And not succumbing to other people’s neuroses.
This vacation could be titanically disastrous. It all began with Jean’s English cousin, Catherine, who was planning a holiday, as they say over there across the pond. She and her friend Tracy were flying into Miami, spending a week in the Keys and then boarding the boat for a Caribbean cruise. Jean, who doesn’t get to see her off-the-continent cousin very often, and who has never vacationed without her family, got the bug in her ear to join them and then planted it in mine.
All you have to do is suggest a cruise and I’m in. Ask me to go on a mission trip to Guatemala where my personal comfort issues may be compromised and it’s a totally different story. While the cruises I can afford are far from living in the lap of luxury, I know what to expect, when to expect it and how to prepare for it.
This would be my tenth cruise. The first one was back in my early 20s. My sister Emily who owns Travel Finesse, got great travel agent deals on cruises. We paid peanuts for the week, but the trade-off was you could get bumped for a full-paying customer at the last minute. And we did. I think I cried real tears. But eventually, we got on a Costa Cruise to Bermuda and had the time of our lives. Shortly after that, I recruited Penny (aka Patty) and we twice paid full-price for our fun, eating baskets of bread, drinking buckets of beer and flirting with bartenders who really thought they had a chance with us.
Next up was a cruise with my sister Nancy. After fighting for position at the porcelain throne on the first night (the only nauseously rocky seas I’ve ever experienced),we had a great time, making friends with half-a-dozen other twenty-somethings. Nancy even had a week-long love affair.
Then I took a cruise hiatus, got married and raised some children. The year my father died was the year the Queen Mary II launched and my mother, sisters and cousins Bonnie, Susan and Karen all went on a three-day cruise-to-nowhere out of New York. It was a little more elegant than I was used to, but people-watching was prime and we still guffaw over our favorite same-sex couple who carried a dressed doll around with them. Matching that is. To their matching outfits.
We even went on a family cruise to Canada which sealed the deal for my spouse. He enjoyed his haven at the bow of the ship where he caught the sunrise, but even that brush with beauty couldn’t cancel out his disdain for organized fun and forced overindulgence.That’s when he started sending me off on my own. After all, how much trouble could a couple of middle-aged women get into on a well-oiled ship?
If only he knew.
Catherine and Tracy were the perfect people to vacation with. Neither one of them outwardly displayed any major character flaws. Like many Europeans, they travel with a vengeance. They want to do and see as much as they can and don’t get bogged down with the details. Catherine is fun and personable and has no problem venturing off on her own to parts unknown. Tracy has a dry wit and an unexpected sharp tongue. Though not as exuberant as Catherine (who could be?), she kept us giggling, that is when we could understand her Londonesque lingo. 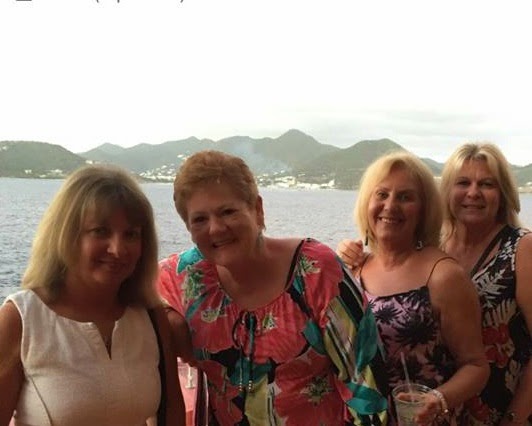 Scott from New Hampshire, by way of Massachusetts, popped into the scene and became our protector. And our enemy during the Super Bowl. Though Jean mocked him mercilessly every time he said “cah” or “bah,” he followed us diligently up and down the streets in port, waiting patiently as we peed repeatedly, bargained with the natives for jewels we neither needed nor could afford and pretended not to listen to us talk about our rubbing-together-thighs as we walked the streets in our swimsuit cover-ups. Until of course, we walked him raw.

We went to beaches in every port, even though I swore I wouldn’t step foot on the sand. We took a boat over to St. John to the most beautiful beach I’ve ever seen. 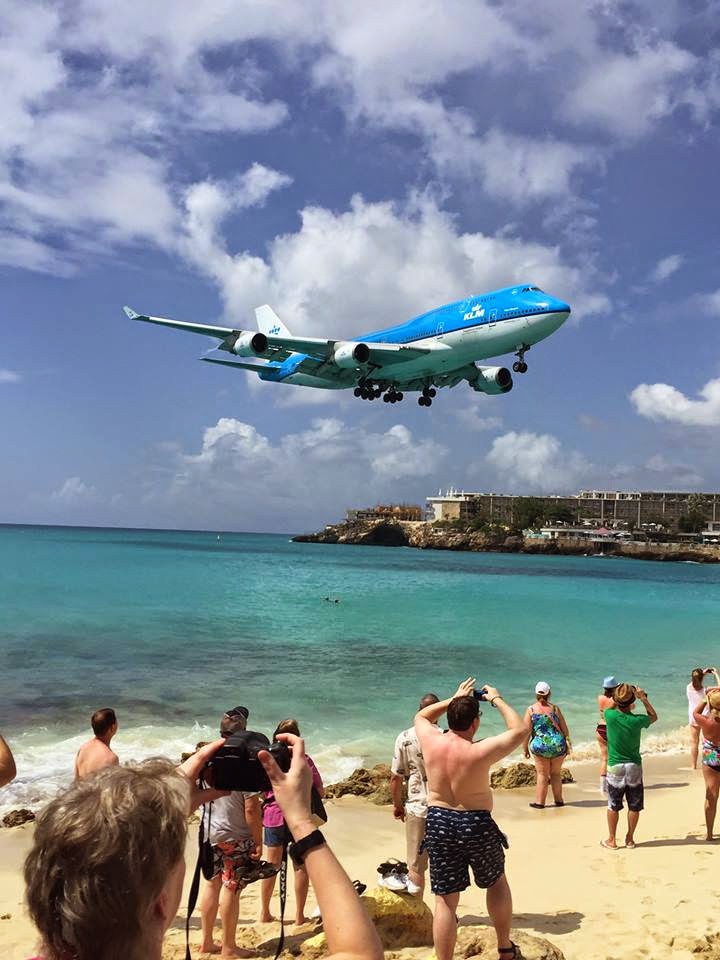 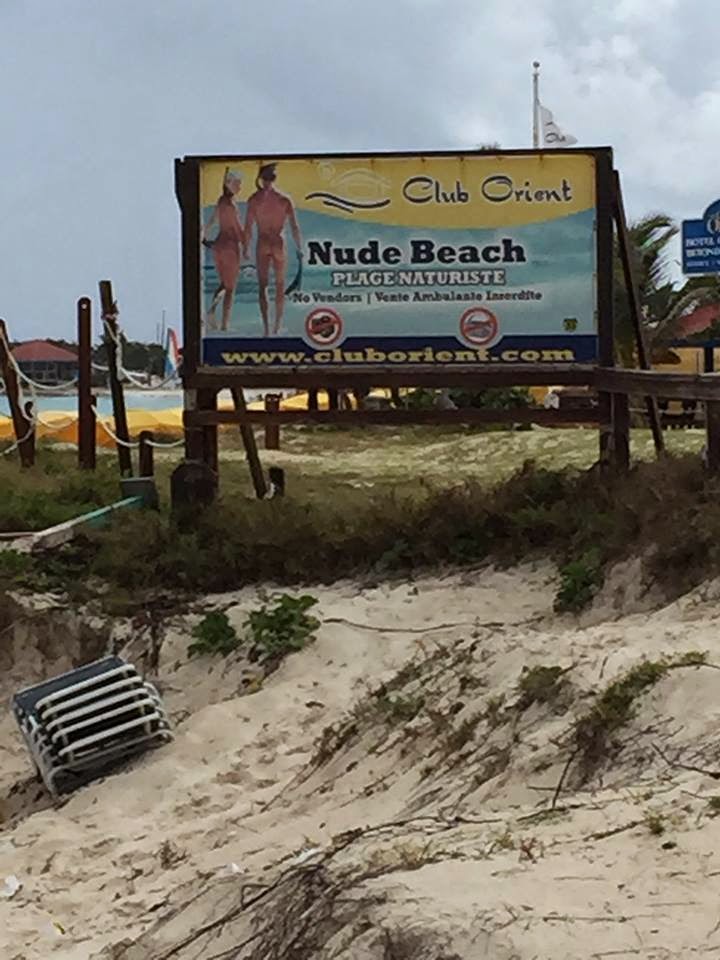 We went to a nude beach in St. Maarten (did not disrobe), a beach where planes soar three-feet above your head and a beach in the Bahamas where an all-you-can-drink from a coconut scam was exposed when the rum turned out to be water. 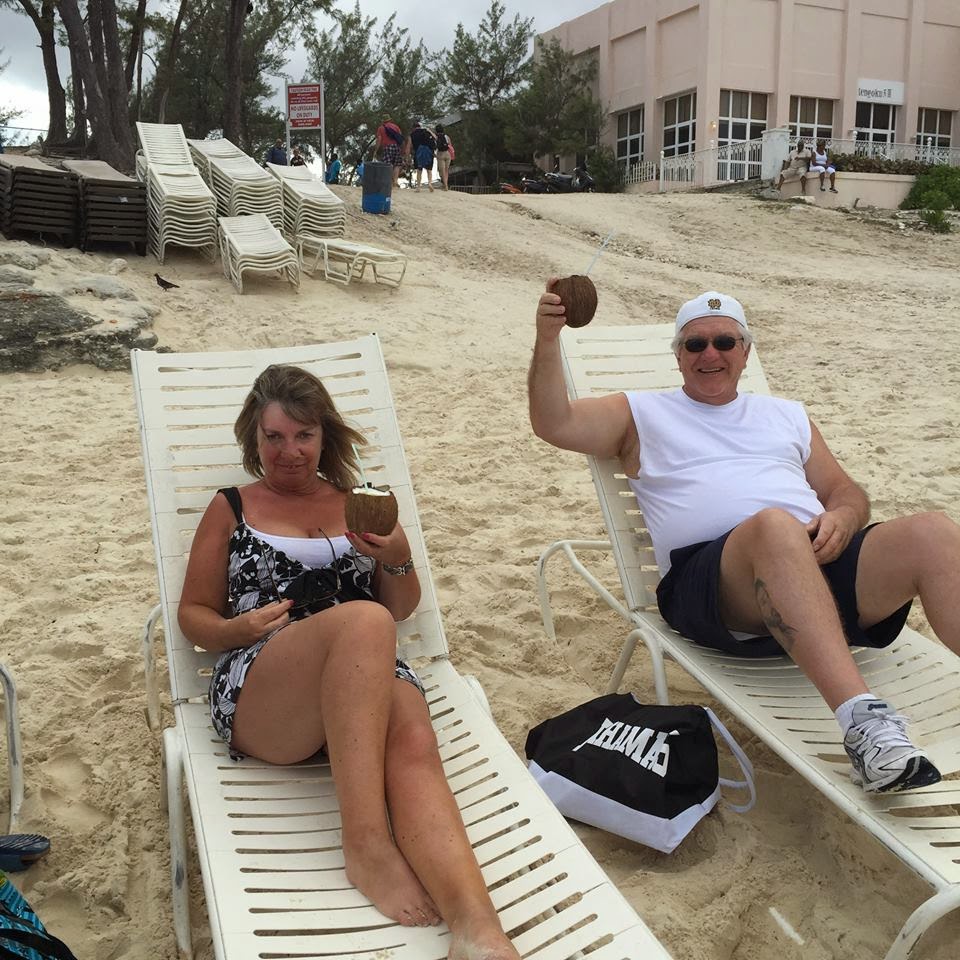 Even though there were some 3,900 on board, we ran into the same people time and time again. There was Negative Nelly from Calgary who we learned to duck. There was soft-spoken Cecilia from Oregon who didn’t share our passion for cocktail hour and Latanya from Atlanta who backed away the minute we started telling stories about the liqueur that Jean bought in St. Maarten. Ryan was a pilot we met at the Mojito Bar the night before he was getting married on St. Thomas. We never saw him again. There was the adorable young couple from Louisville who asked my advice on whether to go for that third child or not. I was honest. There was the kidney doctor and his wife and the know-it-all couple who had been on so many cruises they knew all the crew members.
One day, upon realizing we had only consumed 16,093 calories, Jean and I went off to the late-night buffet. We stuffed ourselves with ice cream and pizza to bring our intake up to an even 20K. As if running into the 400-pound couple on the buffet line wasn’t enough of a wake-up call, when we got back to the room, we found our room steward had left us a pig made out of towels. Another night we got an elephant.

A cruise is a cruise is a cruise. They’re all so similar, yet each one takes on a character of its own. They are nothing more than a contrived week of forced fun, yet always filled with new friends and experiences. I don’t know that I’ll ever get tired of going on cruises.

And so, as I spent the week shoveling snow and slipping on ice, I started googling summer cruises. Then I checked my bank account. Which lead me to google Job Opportunities on Cruise Ships. But I’m not sure I want to be the ones serving the drinks or cleaning the rooms or cooking the dinners. So instead, I googled, How to Cruise for Free.

Apparently, you can. You can enter sweepstakes. Multiple ones. Multiple times. And end up on multiple mailing lists and have multiple disappointments as you lose your free trip over and over again. Or, you can try your luck with a Seminar at Sea where you speak once or twice during the week on a topic that will attract the masses. I remembered that my former next-door neighbor used to go on a free cruise every year and lecture about the Panama Canal.

Bingo! I can talk to and in front of anyone. And I’ve got the perfect hook.

But somehow, I don’t think a seminar on Making Friends and Overindulging on a Cruise Ship is quite what they’re looking for.