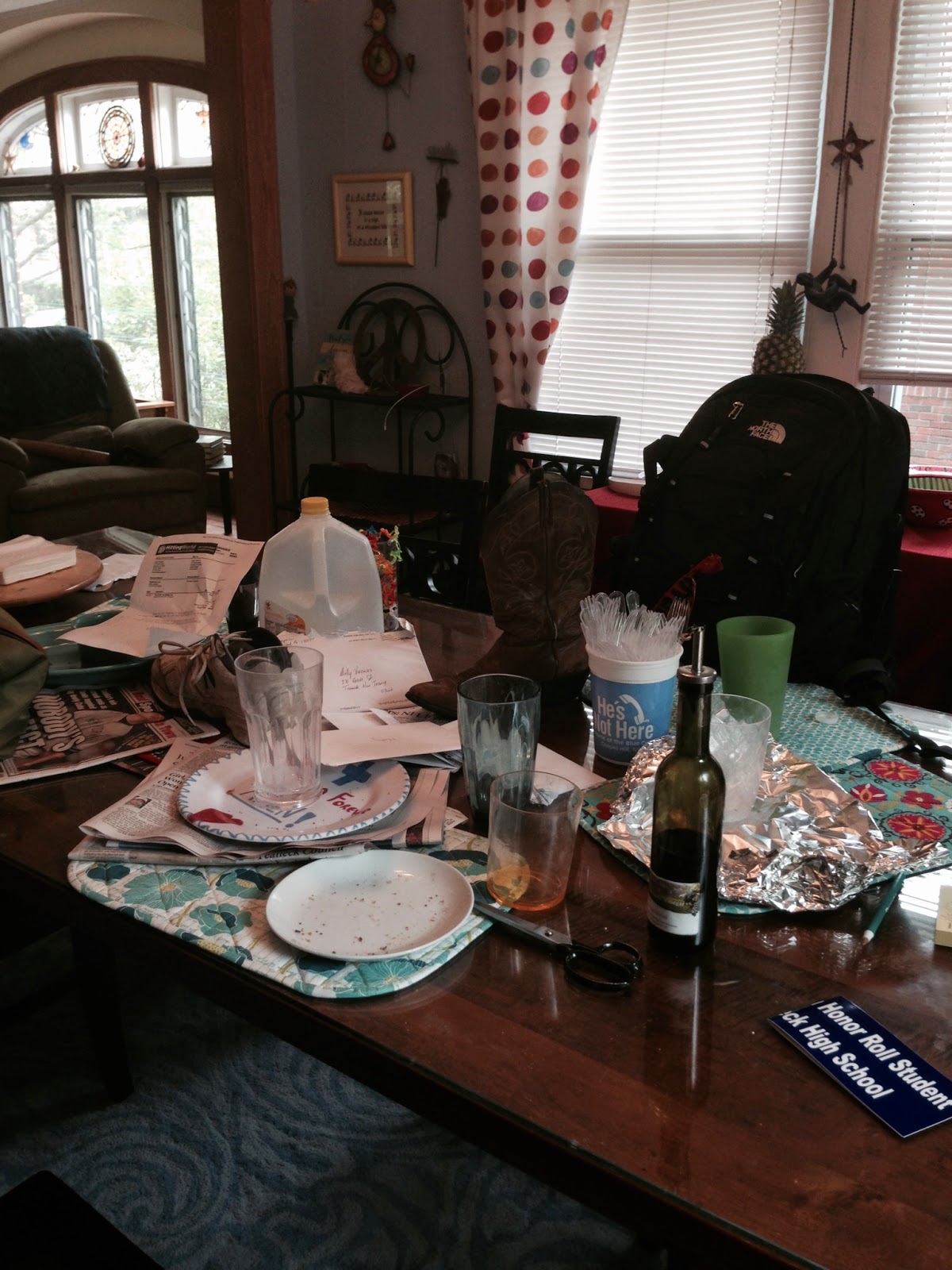 I am not a laugh-out-loud kind of gal, but my friend Jean can make me roar from the belly like no one else. We carry on full conversations via text, amusing each other with comments on everything from the screamers on our singing shows to the breaking news that paints our poor town in a bad light yet again, to our over-indulgences, both liquid and solid. Most recently we have had a running commentary on the return of our children from college.
Like me, Jean has three children. Heather and Brian are the same ages as my older two, Molly and Max. While we stuck to the every-other-year pattern in producing our third, they skipped a bunch of years; Katelyn is a freshman in high school, but Leo is on his way out.
We spend holidays, watch Jets games and party heartily with the Santostefanos. We are much more often at their house than ours, simply because Jean is better at entertaining than I am. Her house is always clean, her dinners are always delicious and their living room television is at least eight times the size of ours. She also cooks family dinner every single night, so really, what’s five more?
Heather and Molly were best friends through high school and spent many, many hours together in their respective attic bedrooms figuring out ways to torment their mothers. Brian and Max, who went to the same college, couldn’t be bothered with the back-and-forth banter and much prefer sports talk with their dads. And Katelyn and Leo learned long ago that keeping their mouths shut would help them slide under the radar.
And that is precisely why our lives have been so much calmer since the older ones left for college.
But, they are back.
“This is awful with all three home!” Jean wrote, following a text about the girl who can’t sing because her dentures get in the way. “I can’t remember it being like this last summer. The two of them are fighting over the car, still nothing put away, dishes piled up in the sink every night. I’m going to kill someone!”
I looked around my house at the six pairs of sneakers strewn between the front door and the basement stairs. I saw backpacks and car keys and a hair brush with long, long hair wrapped around its bristles. There were cups, lots and lots of cups, on the kitchen counter. Some half-full, some half-empty, but all dirty. The Brita water pitcher was empty in the refrigerator next to the empty egg carton and half-eaten container of yogurt. Graduation cards were scattered across the kitchen table, money gone (I checked), but crinkled envelopes left as reminders for me to nag about writing thank you notes.   Massive amounts of soda cans and pizza boxes fill the recycling bins, though I do give them credit for not filling them with beer bottles.  The dog, previously not a beggar, follows them around for the crumbs that accidentally-on-purpose fall from their hands. Their bedroom doors are kept shut.
The bathroom stays steamy all day long, my mascara disappears along with the twenties from my wallet. There’s not enough food in the refrigerator, not enough televisions in the house, not enough money in the bank account to keep them comfortable.
“Relax, Mom,” they say. “Relax.”
Last night, Molly sat cross-legged on the floor next to my throne in the living room and tried to teach me the fine art of tweeting. We watched the grand finale of The Voice together and she didn’t mock me for investing the past five months in such folly. We motivated each other with talk of getting ourselves back in shape, lasting until we rediscovered the brownies we had baked over the weekend. We talked about her excitement and trepidation of the life looming before her and how in one short week she’d be in New Orleans with a new job.
And then her brother flew through the house demanding the car keys, the other filled the basement with his friends and the sound of a deep, pounding bass. Her father came home from hot yoga, yelled at us for bickering when we weren’t, and the dog started running around like the lunatic that he is.
It’s been a long time since we’ve all been together under one roof. I can’t help but wonder how we did it for so long. How could we have shared one shower (of course, no one but my spouse will use the basement bathroom), how did they all share one car, how did we survive the constant chaos?
Did they always eat so much? Play their music so loud? Entertain so often? Did they always sleep until noon, stay up until dawn, leave the house at will and deplete us of so much money?
Jean and I understand each other when it comes to our kids. Our friends have been know to cringe at the things we say because neither one of us minces words. But when we complain about the suitcases on the stairways or the fourth gallon of milk gone in a week, we know what we really mean.
And so do our kids.
Despite the mess, the commotion, the fretting, the frenzy, there’s nothing like a full house to remind us just how full our lives have been.