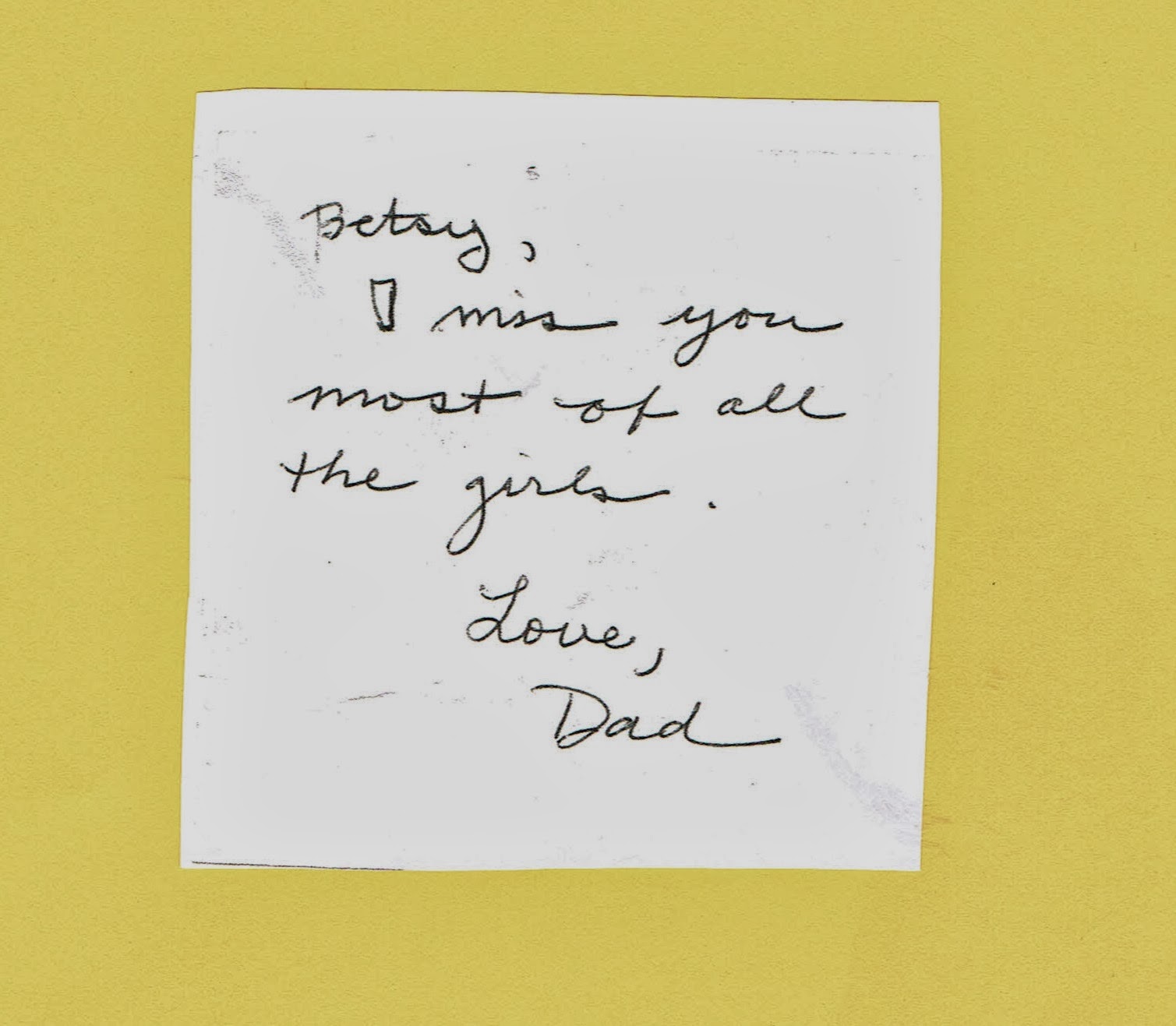 I am a memory miser. Sitting on my desk is a little ceramic dog with a spinning head that I bought for $1.95 in a Pocono gift shop, reminding me of my days at Camp Hagan. I have a hideous ring-sized straw box I purchased, or pilfered, in Nassau on my senior high school class trip. I have a faded home-made valentine above my desk from my sister Nancy that reads, “We must learn to waste time with those we love.” My friend Madge sent me blue-beaded earrings from Israel when I finally got my ears pierced in my mid-twenties. Rusty and dusty, they still have a place in my jewelry box. And, I still have the note from my long-gone father stating that I was missed most of all.
I am one of four daughters. We have always been very close, both in age and kinship. We all went away to college and we all came home, though one sister lived briefly in Germany, one in Richmond and another in Dallas. They now all live within a few miles of where we grew up, and I did too, until I got married and moved a mere 100 turnpike miles away. But, I know the note was written long before that, and most probably was written when three of the four of us were away at college.
Today, on her 22nd birthday, I will think of my daughter all day long. I’ll talk to her later, once she’s recovered from last night’s Molly Gras party. I saw her last weekend when my sister and I went to visit her in North Carolina and I won’t see her again until her college graduation in May. But, in the four years she’s been away at school, I believe there have been two days I haven’t heard from her in one form or another. And that’s only because she was on a sorority retreat and they weren’t allowed to use their phones.  We are in continuous contact. She calls, we text, we send e-mails. I told her I better not hear from her when she is in Jamaica for spring break because I don’t want to pay for the Rum Runner-induced international text charges. She may live 500 miles away, but I feel like I am totally connected to my daughter. And that is why today, I don’t miss Molly the most.
Leo, the youngest, still lives with me, even though he spends hours holed up in the basement watching House of Cards under the guise of doing homework, in his bedroom listening to rap songs through over-sized headphones, or at one gym or another working out for the upcoming baseball season. Sometimes he comes home from school at lunch time if he needs money and we have a three or four sentence conversation. He has his own car and comes and goes at will. He cooks his own eggs and follows his own schedule. I experience varying degrees of his physical presence every single day, so today, I don’t miss Leo the most.
Max in the middle is in college in California. Though it’s a faraway place to be, the plane ride is actually shorter than the drive to North Carolina. I flew out with him when he started at USC in August and met his roommate Xiang from China. The first half of the first semester, I heard from him almost every day. There were so many texts and phone calls I was afraid he wasn’t having any fun. His father was pleased that Max talked so much about his school work but I fretted when he lamented that he still hadn’t found anyone like his boys from Teaneck. And then it happened, as it always does. Max found his niche and now is so busy working, socializing and sometimes studying that a quick phone call takes more time than he has to give. I know he’s alive because unlike the other two, he actually lets me follow him on Twitter. And, I know he thinks of me because he retweets my blogs.
I was my father’s Max. I knew my family loved me. They knew I loved them back. But I didn’t keep in touch every day. Or every week. And I still don’t. My parents gave us the extraordinary gift of stepping back and letting go.
I want my kids to live their lives as freely as I did. I want them to be happy and productive and have lots of fun, whether that be in North Carolina or New Orleans, New Brunswick or Southern California. And I want them to do it all without any guilt strings tugging from home.

So, today, I’ll call Molly and wish her a happy birthday. But, I’m not going to call Max. Instead, I’ll leave him with a little note that he can keep until his children go off to college. Because today, I miss Max the most.

And that’s something all of us need to hear, every now and then. 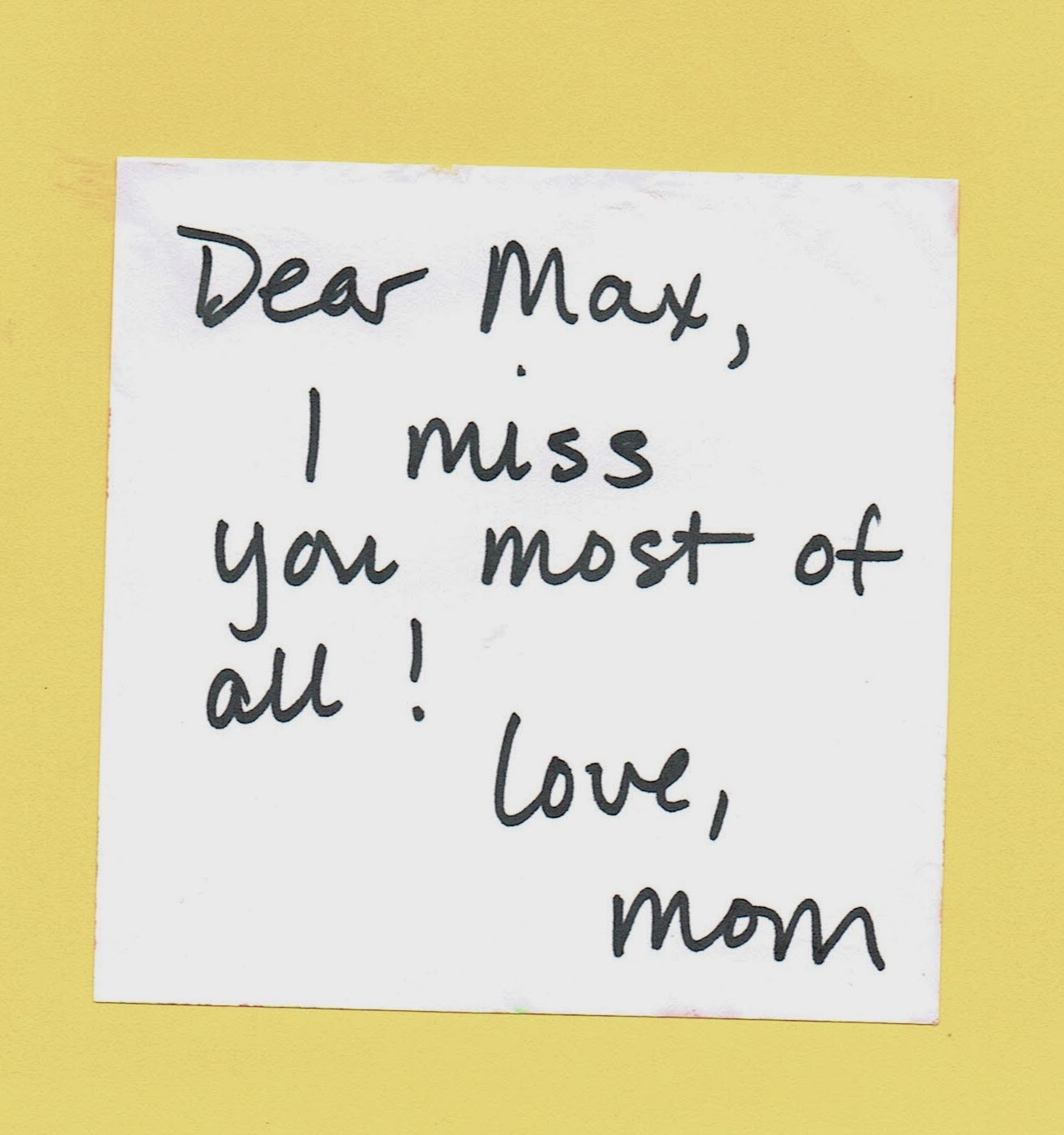